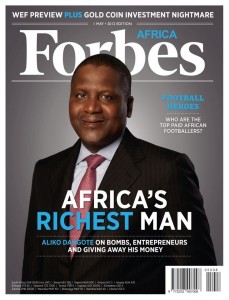 US base business website, Forbes has announced the Forbes Africa Person of the Year shortlist, with Nigerians dominating.

Forbes announced on its Forbes Africa page, that it had narrowed down its shortlist for the 2013 Person of the Year Awards. The awards will take place in Nairobi, Kenya at the beginning of December this year.

An official voting is also open to the public who can make their selection of the individual they deem most worthy of the Person of the Year title.

The Person of the Year Awards celebrate ‘the individual who, for better or worse, has had the most influence on events of the year gone by’ and Forbes Africa has welcomed the participation of the public in what is fast becoming one of the most anticipated annual events in Africa.

“Every year, we are excited to decide the Forbes Africa Person of the Year. We want to honour the big hitters of the continent who are making a difference in people’s lives and we hope that in doing so, it will inspire others,” commented Chris Bishop, the managing editor of Forbes Africa magazine.

Three Nigerians, one South African and one Zimbabwean, made the shortlist.

1. South African mining magnate, Patrice Motsepe, plans on giving away more than half his fortune over the next five years.

2. Akinwunmi Adesina is Nigeria’s Minister of Agriculture and his vision is to make Nigeria a self-sustaining, food-producing nation and register 20 million farmers by 2015.

3. Aliko Dangote is Africa’s richest man and his net worth has significantly increased on the back of his continued business success, allowing him to better the lives of millions.

4. Strive Masiyiwa is the founder of global telecoms group, Econet Wireless, and through Capernaum Trust he educates tens of thousands of Zimbabwean orphans.