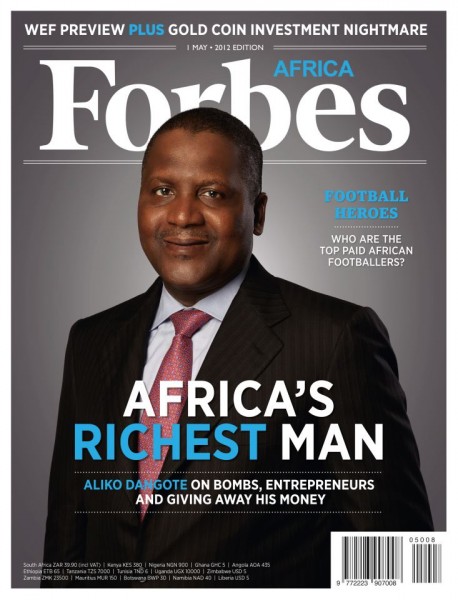 US-based magazine Forbes has listed Africa’s richest man Aliko Dangote as one of the most powerful people in the world.

Ranked 64th out of the 72 persons recognised by Forbes, Dangote was one of two black people that made the list. The other being UK-based Mohammed Ibrahim, founder of Mo Ibrahim Foundation.

Obama has been on the top of the list every year with the exception of 2010, when Hu Jintao, the former political and military leader of China, was number one, according to Associated Press (AP).

Forbes’ annual World’s Most Powerful list is made up of heads of state, financiers, philanthropists and entrepreneurs and the list represents the collective wisdom of top Forbes editors, who consider hundreds of nominees before ranking the planet’s top 72 power-brokers.

Forbes 10 most powerful people in the world


17 heads of state who run nations with a combined GDP of some $48 trillion — including the three most powerful people, Putin, Obama and Xi Jinping, the general secretary of the Communist Party of China, all sit atop this year’s list.

The list also include 27 CEOs and chairmen who control over $3 trillion in annual revenues, 12 entrepreneurs, and debutant billionaires Nigeria’s Aliko Dangote (No. 64), founder of Dangote Group, and Oracle’s Larry Ellison (No. 58).

There are 28 billionaires on this year’s list, valued in excess of $564 billion.

Although he was recently elected pope, his office and personality has seen Pope Francis take the 4th position, with 12 other newcomers joining him on the list, including Samsung Chairman Lee Kun-Hee (No. 41), Volkswagen’s Martin Winterkorn (No. 49) and the South Korean President Park Geun-hye (No. 52).

Nine women made the list, including Christine Lagarde (No. 35) who leads the International Monetary Fund (IMF) and Margaret Chan (No. 59) who steers the World Health Organisation (WHO).