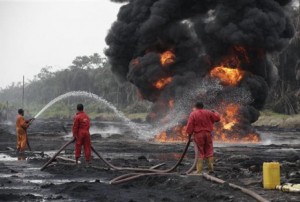 Four members of the same family were yesterday killed while attempting to scoop petroleum from a ruptured pipeline in Tariya village of Bassa Local Government Area of Plateau State.

Confirming the incident, Assistant Public Relations Officer of the Nigeria Security and Civil Defence Corps, NSCDC, Chrisantus Longbit, said two of the victims were burnt beyond recognition, while the other two, who were rushed to Our Lady of Apostle Hospital, Jos, died shortly after.

According to Longbit, when the five people went to siphon the petroleum, a misunderstanding ensued amongst them. One of them, who is presently at large, allegedly lit a match that led to the explosion.

“The person who lit the match fled the area, but we have spoken to his family and they gave his name as Idi.

“We have warned the communities and the NSCDC Commandant, Vincent Bature, has on several occasion visited the village head on this issue of pipeline vandalism, but they have refused to listen,” Longbit said.