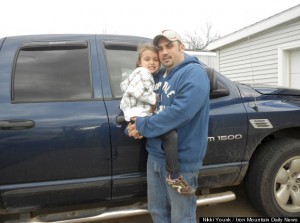 One lucky dad has his 4-year-old daughter’s extraordinary bravery and quick thinking to thank for saving his life.

Chris Lucas, from Iron Mountain, Mich., was knocked unconscious after hitting his head while unloading scrap metal from his truck on October 15, according to the Daily News. Four-year-old Cadance, who was with him, took action. She ran about a quarter-mile in the dark to find a neighbor for help.

Cadence told TV6 that she knew her dad needed help when she saw him lying on the ground near the back of his pickup truck.

“Most kids would have sat there until their parent woke up,” Chris Lucas told the Daily News. “She took the initiative to run out even though it was dark.”

Fortunately, the neighbor called an ambulance. Lucas sustained a small bump on the back of his head, according to TV6. But he thinks the end result would have been much worse if his daughter hadn’t responded the way she did.

“I think she saved my life,” Lucas told the station. “She’s my hero for sure.”