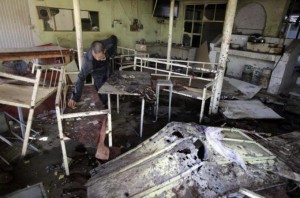 At least 38 people have been killed in bombing and shooting attacks in Iraq, with journalists, pilgrims and cafe patrons among the victims.

At least 13 people were killed and 32 injured on Staurday in a car bombing at a cafe in Balad, near Tikrit, police say. The AFP news agency said it was the same cafe where a suicide bomber struck in August, killing 16 people.

A bomb targeting Shia pilgrims in Adhamiyah, Baghdad, killed 20 people and wounded at least 55, according to officials. The pilgrims were walking to a shrine to commemorate the death of Imam Mohammed al-Jawad, the ninth Shia imam.

A reporter and a cameraman working for Al-Sharqiya television channel were shot while working in the northern city of Mosul, according to police.

And three militia members, who belonged to the government-backed Sunni Sahwa (Awakening) group, were killed in a roadside bomb explosion in Yousufiya, south of Baghdad.

Violence has reached a level unseen since 2008, and there are fears Iraq may relapse into the kind of intense Sunni-Shia bloodshed that peaked in 2006-2007 and killed tens of thousands of people.