Last week, the Nigerian Civil Aviation Authority, NCAA, announced plans to embark on yet another round of safety audit of all domestic airlines operating in the country. 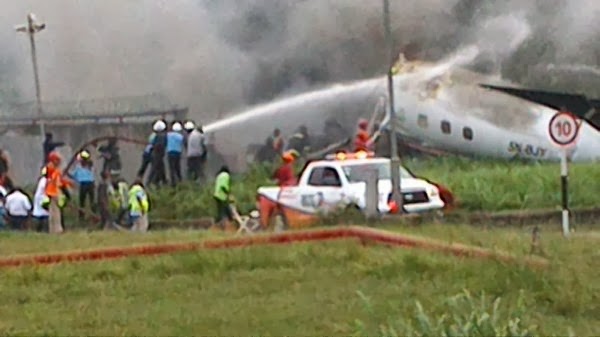 This is coming as an aftermath of the crash of Associated Airlines’ plane in Lagos which claimed the lives of at least 15 people. The plan to audit the airlines will be one in a series of airlines’ audit which had trailed the aviation industry since aircraft started falling off the skies since 2005. After the crash of Bellview Airlines in October 2005; Sosoliso in December 2005 and ADC in October 2008, each accident had come with safety audit of airlines, yet planes keep dropping off the skies. What this means is that there appears to be a fundamental problem in the system that has not been addressed, and that has to do with policies enunciated for the industry by government.

There is a suggestion that no matter the volume of safety audit conducted on airlines, safety would remain elusive as long as the operating environment created for airlines remained harsh. Neither would re-modelling of airports reverse this trend. The mortality rate of airlines in Nigeria isnhigh due to what observers describe as a very harsh operating environment.

Bellview, ADC, Sosoliso, Spaceworld, EAS, Harka, Okada, Oriental, Concord, Flash, Air Nigeria are some of the airlines that have exited the airspace in the last 10 years. This is frightening. Some others may yet follow. Firstly, the tax regime introduced by government for airlines in the country creates a near asphyxiating ambience for operators.

Airlines pay all sorts of charges which stifle them. Consequently, this is the reason most airlines find it difficult to meet their financial obligations to suppliers, service providers and staff. Even the payment of salaries and aircraft maintenance, when due, becomes a Herculean task. Airlines in Nigeria pay some of the most outrageous charges in the world.

These come in form of ground rent, landing and take off, day and overnight parking charges as well as navigational fees; and these are exclusive of other multiple taxes imposed by government. Overnight parking charges range from between N25,000 and N30, 000 per aircraft. Airlines in Nigeria also pay government taxes as high as 18 per cent of sales, including Value Added Tax, VAT, Passenger Service Charge, PSC and NCAA’s TSC. These taxes and charges, to say the least, are stringent for the airlines to operate safely and profitably. And an airline that cannot operate safely and profitably is an accident waiting to happen.

Another reason air safety would remain a challenge in Nigeria, no matter the frequency of audit, is the cut-throat price of aviation fuel, otherwise known as JET-A1. At present, this product sells for between N170 and N200 litre, depending on which part of the country it is being sourced. And because up to 40-45 per cent operational cost of airlines revolves around aviation fuel, the product is a huge cost component of their operations in the country.

Over time, fuel suppliers have insisted on dispensing their products on a cash and carry basis because of the inability of airlines to settle accumulated debts arising from previous purchases. This has largely been responsible for some of the delays and flight cancellations experienced by passengers at airports across the country. Currently, there is no sign to indicate that government is addressing the problem.

Most foreign airlines do their re-fuelling in neighbouring countries because of the high cost of aviation fuel in Nigeria but the local airlines have nowhere to go. When it comes to the issue of aircraft maintenance, the situation is even more dire for the airlines. Aside from a few of the airlines which have capacity for A and B checks in the country, all airlines operating in Nigeria take their aircraft to other countries for their C-check, which comes up between nine and 18 months, depending, however, on the number of cycles an aircraft had clocked within the period.

This costs airlines as much as $1 million per aircraft. The situation is so because there is no standard hanger anywhere in the country where such a check can be conducted on aircraft. Consequently, airlines in Nigeria take their planes to such countries as Ethiopia, Morocco, Egypt, South Africa, France and even tiny Mauritius for their C and D checks.

At the last Maintenance, Repair and Overhaul, MRO, conference in Addis Ababa, Ethiopia, in February, experts were unanimous on the leverage and cost-cutting advantage an MRO centre has on airline operations and safety. They also attributed the absence of it in Nigeria to most of the safety issues that had arisen in the country this decade, particularly in the last couple of years.

Over time, stakeholders in the industry have clamoured for the establishment of a national hangar by the Federal Government as no one airline could shoulder the cost of establishing it. Though successive aviation ministers bought into the idea, nothing was ever done to bring it to fruition. Had government set up an MRO centre, the issue of taking planes out of Nigeria and paying exorbitantly an hard currency would have since Stopped and Nigeria would have become the hub of maintenance in West Africa.

At the moment, there is no such centre in the region. To be able to cope with multiple taxes and crippling charges imposed by government, airlines have had to increase fares on frequent basis, thus reducing the number of people that can afford air travel. This is not good enough for a country angling to be the hub of aviation business in West Africa.

With regards to loans, stakeholders have also canvassed the creation of an Aviation Development Fund, ADF, where operators could secure facilities at single digit interest rate, and not the current rate of interest in commercial banks that has helped to further strangulate airlines in the country. Unfortunately, the tokenism that passed for an intervention fund suffered greatly from corrupt practices.

One other area government has stifled the ability of airlines to earn sufficient revenue to operate safely and profitably is the continuous granting of multiple entries and frequencies to foreign airlines who,at the moment, do aviation business in Nigeria. What other governments do to grow their aviation sector with a view to driving economic growth and create jobs is to discourage granting such leverages to foreign airlines operating into their territories. This is done to protect local airlines which would assist foreign airlines distribute their passengers domestically and make money.

Today, virtually all the foreign airlines in the country, including British Airways, Lufthansa, KLM, Emirates, Ethiopian Airlines and Kenya Airways, enjoy multiple entries and frequencies in the country, with some even operating two frequencies from one airport per day. This situation does not only engender capital flight but also sounds the death knell for domestic airlines in Nigeria.

Nigeria currently has Bilateral Air Services Agreement, BASA, with several countries, whose airlines do business here, without an enforcement of the doctrine of reciprocity. It does appear that the Aviation Ministry is content with earning royalties from the host governments of foreign airlines than work to ensure that Nigerian carriers are strong enough to reciprocate BASAs.

Such royalties are just a fraction of what would come to Nigeria, if the local airlines reciprocate the BASAs. Now, talking about the ability of the regulatory agency to really ensure safety, against the backdrop of Associated Airlines’ crash, the issue to ponder is whether the NCAA has the capacity, in terms of personnel, for effective oversight of airlines in Nigeria? Observers insist this is doubtful and may explain the reason why planes keep falling off the skies, in spite of constant audit.

Unconfirmed reports have it that the agency currently does not have more than 10 time-tested safety inspectors for the whole country, with greater percentage of the personnel concentrated in Lagos and Abuja. Meanwhile, the Federal Government has control over 22 airports in the country, which are exclusive of those owned by states and planes fly passengers into these airports.

During the time of the immediate past director-general of the agency, Dr. Harold Demuren, he always admitted that NCAA lacked adequate number of safety inspectors and that the few available were aging. The umbrella body of cabin crew in Nigeria, the National Cabin Crew Association, NACCA, expressed concern over this development when the Dana airliner crashed in June last year and wrote to the Aviation Minister to address the issue.

The letter, dated February 7, 2013, highlighted the paucity of safety inspectors on the part of the NCAA, and called for the agency to be fortified with more inspectors. The group’s concern stemmed from the number of its members that had died in plane crashes since 2005. It also called for the reversal of the system where airlines bear the cost of NCAA oversight personnel who travel overseas to inspect foreign training centres and aircraft airworthiness, noting that aside from putting more burden on airlines, the practice also could lead to compromises on the part of the personnel. Besides, the agency lacks the necessary autonomy to do its work without overbearing influences from the supervising ministry.

Although the new Civil Aviation Act of 2006 gave the NCAA autonomy, as part of the requirement for Nigeria to attain U.S. Federal Aviation Administration, FAA, Category 1 certification, which the country achieved in 2010, it does appear now that that autonomy is only on paper. This is because the director-general of the agency cannot take very critical decisions that may even affect lives, without first seeking the approval of the minister.

Unless the status-quo is reversed, Nigeria stands the risk of losing the certification, which the Federal Government fought so hard to get. From the foregoing, it is obvious that it would be difficult to ensure air safety as long as the operating environment for local airlines in the country remain harsh. Government needs to start addressing issues raised here rather than see aviation as one sector it must make money from to make up for shortfall in oil revenue. Until these are done, planes may keep dropping off the skies, despite safety audits – but God forbid