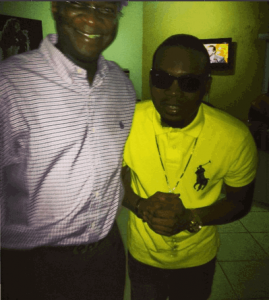 King of the streets, Olamide had his best musical year so far. Dropping hits upon hits and all of them going viral.

The baddo not only makes the right musical decisions but also has been spotted at the right place with the right people all year.

Olamide was able to meet with Lagos State Governor, Babatunde Fashola sometime last week and the pair posed together for a photo.

Olamide’s 3rd studio album is due to be released first week of November.