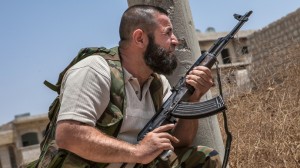 A long-delayed Geneva peace conference aimed at bringing together Syria’s government and opposition now has a date.

El-Araby made the comment to reporters after meeting Brahimi, the joint UN-Arab League envoy for Syria, at the bloc’s Cairo headquarters, on the first leg of a regional tour he is conducting ahead of the conference.

Meanwhile, a meeting will take place in London on October 22 between representatives of the Syrian opposition and the foreign ministers of the so-called London 11.

British Foreign Secretary William Hague said the nations would “discuss preparations for the Geneva Conference, support for the [opposition] Syrian National Coalition, and our efforts to achieve a political settlement to this tragic conflict.”