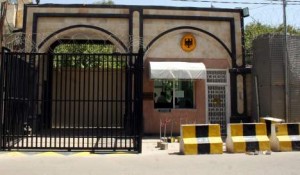 Unknown gunmen have killed a German embassy guard in an attack on a diplomatic vehicle outside a supermarket in the Yemeni capital, Sanaa, a security official says.

The official said the two gunmen tried to kidnap the German citizen as he left the supermarket on Sunday, killing him when he resisted, and fleeing in a car.

The official did not give details on the identity of the German man. He spoke on condition of anonymity because he was not authorised to brief
reporters.