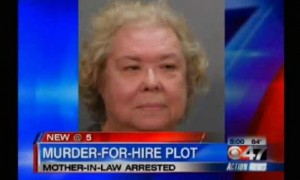 A 70-year-old Florida woman was willing to take the most extreme measures to make sure her son wasn’t stuck in an unhappy marriage, despite not being certain if her son was truly unhappy in his marriage. However, the elderly woman was arrested after she tried to solicit an undercover cop to murder her daughter-in-law.

According to the Jacksonville Sheriff’s Office, Diana Reaves Costarakis attempted to put a $5,000 price on her daughter-in-law’s head. Costarakis met with the man she believed to be a hit man, but in all actuality was a police detective, in a Home Depot parking lot. She gave the man $500 as a down payment along with a photo of her son’s wife, their home address, and a description of what kind of car she drives. The following day, Costarakis and the undercover cop met in the same Home Depot parking lot where she gave the cop an additional $1,000. She explained that her daughter-in-law tends to wear expensive jewelry and that he could keep whatever jewelry she had on at the time he killed her. Diane Costarakis told the cop to keep the jewelry as final payment.

The undercover officer asked the elderly woman if she wanted her daughter-in-law dead and she responded, “If you don’t, I will.” Upon hearing her answer, the undercover cop arrested her. She was charged with criminal solicitation and criminal conspiracy to commit murder, which are both first degree felonies.

After she did all of this and landed herself in prison, we wonder if her son will stand by her side considering his mother wanted to kill his wife.