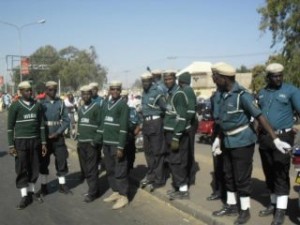 Police who enforce Islamic law in Nigeria’s northern city of Kano have arrested 150 people in the last week, including for indecent dressing, as part of a crackdown on immorality, a spokesman said Tuesday.

Others were thrown in jail and fined for wearing their trousers too low on their waists, mimicking a style that became prominent in the 1990s, partly through the influence of some American hip hop artists.

The arrests have followed an order by Kano state Governor Rabiu Musa Kwankwaso to cleanse the city of immoral practices and the trend is set to continue in the weeks ahead, said Hisbah Director-General Abba Sufi.

The Hisbah is a state police force funded by state government and is not part of the federal police.

“We have arrested 150 men and women in the past week, including prostitutes and their boyfriends, transvestites, alcoholics and those engaged in indecent dressing in contravention of the sharia legal code,” Yola told AFP.

Religion has repeatedly been used as a political issue in Kano and the governor, seen as a moderate, has been accused by rivals of lacking commitment to sharia’s guidelines.

Yola insisted the operation was launched to reverse disturbing trends in the city of some five million people and is targeting people of various faiths.

“Those arrested include Muslims and non-Muslims and we treat them equally because this is about morality,” he said.

Kano, like the rest of northern Nigeria, is majority Muslim, but the city has a sizeable Christian minority.

Some of those arrested have been released after paying fines ranging from 10,000 naira to 15,000 naira, Yola said.

“Those who could not afford the fine are being kept in prison,” he added, but he would not specify the number of people currently being held.

At the restoration of civilian rule in 1999, 12 northern states, including Kano, formally adopted sharia, but the Islamic legal system has been unevenly applied.

The Hisbah was formed in 2001, largely to enforce sharia, but the force has other duties, including some community development work and alternative dispute resolution.

The southern half of Nigeria, Africa’s most populous country, is mostly Christian.[AFP]