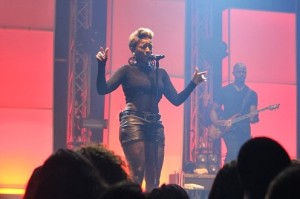 Fun seekers and lovers of contemporary R&B, hip-hop and soul music were last Friday treated to an unforgettable night of music and dance when American Queen of ‘Hip-hop soul’, Mary J. Blige stormed Lagos for the Etisalat and Baileys’ sponsored ‘Sisters with Soul’ concert at the Expo Centre of Eko Hotel, Victoria Island. It was indeed, an experience that cannot be forgotten in a hurry, as fans were yelling for more when the America music idol mounted the stage.

Clad in a mid-riff baring turtle neck top, leather shorts and knee-length gladiator heels, the multiple award winner and multi-platinum selling artiste took the audience back in time, dolling out her most loved songs from the 90s up until her most recent releases. The singer-songwriter who was excited to be in Lagos, kept thanking the crowd for their love and support and expressed her delight when members of the audience sang along as she performed.

The climax of the show could be said to be when Mary J. Blige while thanking the fans, spotted Tiwa Savage in the crown and invited her to the stage to perform. Tiwa after greeting the singer and her crew, did a short christian song were she thanked God for everything. She also defined Mary J. Blige as her idol and model who contributed in making her what she is today. She said she used to perform with Mary back then in USA.

Also excited was the Chief Commercial Officer of Etisalat Nigeria, Mr. Matthew Willsher, who expressed the brand’s delight being associated with the show. “It is exciting for us as a company to be part of the ‘Sisters with Soul’ concert that featured for the first time in Lagos, Nigeria Mary J.Blige alongside other talented female artistes in the country. Mary J, Blige is undoubtedly one of the biggest music icons whose songs cut across generations and we are really glad we experienced her music live here in Lagos.

As a brand, we consider ourselves uniquely different, innovative and dynamic as you can see in the products and services we offer. Music is a huge platform and that is why we lend our support to promoting and celebrating music talent, both foreign and local. Like we always say, Etisalat is much more than just a network!” he narrated.