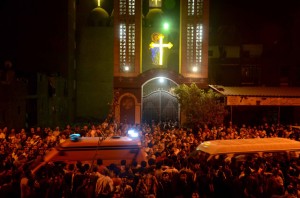 Egyptian police are searching for an armed man who killed three people at a church wedding, in the first attack targeting Christians in Cairo since the overthrow of Egypt’s Islamist President Mohamed Morsi.

An eight-year-old girl was among those killed at the Church of the Virgin in Cairo’s working-class neighbourhood of Al-Warrak while 18 others were wounded in late Sunday’s attack, officials said.

“There were two men on a motorbike and one of them opened fire,” as a crowd emerged from a wedding service, the Interior Ministry said.

The ministry said a woman and a man besides the girl died and nine others were wounded.

Khaled al-Khatib, a senior official from the Health Ministry, confirmed the casualties, though it was not immediately clear if all three were Coptic Christians.

Hazem Beblawi, Egypt’s interim prime minister, condemned the attack in a cabinet statement, calling it a “despicable criminal act”, and said security forces were searching for the assailants.

“Such terrible acts will not succeed in dividing Muslims and Christians,” he said.

Also speaking, Bishop Angelos, from the Coptic Orthodox Church in the UK, said, “It’s terrible to see that in the light of recent attacks where Christians and Muslims are trying to get on with life, regardless of antagonism and violence, that even on a night like this, when people are trying to celebrate, people can lose loved ones.”

He said there was no justification for killing an eight-year-old girl.

Christians, who account for six to 10 percent of Egypt’s 85 million people, have been targeted since Mohamed Morsi, the Islamist president, was swept out of power by the army amid mass protests against his rule, and in particular since a deadly crackdown on August 14 by security forces on two Cairo camps of Morsi supporters.

Islamists were angered by the crackdown and they accuse Coptic Christians of backing the overthrow of Morsi, who belongs to the Muslim Brotherhood and was Egypt’s first democratically elected president.

This perception was reinforced by the appearance of Coptic Pope Tawadros II alongside army chief General Abdel Fattah el-Sisi when he announced on television Morsi’s removal from office. However, Muslim leaders and other politicians were also present.

Bishop Angelos said attacks against Christians had been taking place for a while, but there had been a heightening of tensions in recent months due to the political situation.

“There are still some who wrongly accuse the Christians to be responsible for the ousting of Morsi,” he said.

Copts have long complained of discrimination and marginalisation, particularly under Morsi’s one-year rule.

Rights groups say that Copts have come under attack mainly in the provinces of Minya and Assiut in central Egypt.

On October 9 London-based Amnesty International said that more than 200 Christian-owned properties were attacked and 43 churches seriously damaged across the country since the August 14 crackdown against Morsi supporters in Cairo.