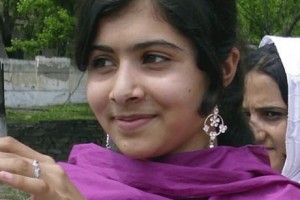 Malala Yousafzai, the teenage activist nominated for the Nobel Peace Prize, says she has not done enough to deserve the award, as her old school closed on Wednesday to mark the first anniversary of her shooting by the Taliban.

The 16-year-old was shot in the head by the Pakistani Taliban on October 9 last year for speaking out against them. She has gone on to become a global ambassador for the right of all children to go to school.

Feted by world leaders and celebrities for her courage, she has addressed the UN, this week published an autobiography, and on Friday will learn if she has won the Nobel Peace prize.

But in an interview with Pakistani radio station City89 FM, Malala spoke of her desire to do more to promote education, saying she felt she had not yet earned the Nobel accolade.

In Swat valley, in deeply conservative northwest Pakistan where women are often expected to stay at home to cook and rear children, officials say only around half of girls go to school — though this is up from 34 per cent in 2011.

Malala was taken to Britain for treatment in the wake of the attack and now goes to school in the central city of Birmingham.

On the first anniversary of the shooting that came within a whisker of ending her life, her old school in Mingora, the main town of Swat, was closed to mark the occasion.

“All sections of our school have been closed today to express solidarity with Malala on the anniversary of attack on her. The school will reopen as usual tomorrow,” a teacher in Khushhal Public School said on condition of anonymity.

Malala first rose to prominence with a blog for the BBC Urdu service chronicling the difficulties of life under the rule of the Taliban, who controlled Swat from 2007 until they were kicked out by the army in 2009.

Though their brutal rule has ended, pockets of militancy remain, with schools regularly being destroyed by insurgents. Fear of the men of violence means there will be no public event to mark the anniversary.

“We did not organise any function in Swat on the anniversary of attack on Malala because people fear they can also be attacked like her,” district education officer Dilshad Bibi said.

“Many girls are scared that they can be attacked if they are attached with Malala.”

While Malala has enjoyed acclamation around the world, in Pakistan the response to her rise to stardom has been more sceptical, with some accusing her of acting as a puppet of the West.

But with her message of hope and determination she has managed to inspire some of the youngsters in her home area.

“The incident of attack on her one year ago is unforgettable. Education is our life and Malala raised her voice for it, so we like her very much,” said 12-year-old Humera Khan.

“I also aim to fight for education when I grow up.” [AFP]