Abdullahi Inua still couldn’t believe that he survived the black Sunday preceding Nigeria’s 53rd independence anniversary. According to him, he saw death face to face in his black uniform but wondered why and how he survived. 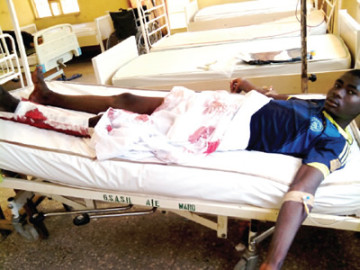 Inua is a student at Yobe State College of Agriculture in Gujba Village, Yobe. He was one of the students attacked by gunmen in military uniform, an incident that left 41 students of the institution and a lecturer dead.

He told Saturday Punch, “I cannot explain why I am still living and talking with you at this moment. I can say it is only Allah that knows why I am still alive this minute. I saw death face to face and it’s very difficult for me to believe that I am alive.

“I was sleeping on my bed and I heard the gunshots. Before I knew anything, one of the Boko Haram guys came into our hostel and started spraying bullets in the room. After he did that for a while, he flashed his torch and started shooting anybody he saw that was shaking; I lay on my bed watching him. When he came to me, he slowly turned his torch away and left. There was blood all over my body so maybe he thought I was dead,” Abdullahi said.

Inua, a pre-ND student and the only child of his mother, said he had to rush home so that his mother could see him because he knew her mind would not be at rest without seeing him.

“I called our neighbours to tell my mother that I was alive but she still could not believe them. She said she wanted to see me so I had to rush to the village in Degubi to let her believe that I was not killed,” he said.

Some other students were not as lucky as Inua.

Isa Mohammed Fika and Mohammed Yau Saleh sustained serious injuries during the attack and they were referred to the Federal Medical Centre, Nguru, for operation. Hospital sources said they would undergo surgery for multiple fracture and gunshot injuries.

The duo who were groaning in pains could not talk when our correspondent visited them at the hospital. Fika only mustered enough strength and was just able to say, “How I wish I could see you after I get well.”

Saleh’s brother vowed that he would not see the walls of that school again in his life.

“I don’t care what it means, oga but my brother is not going back to that school again,” he said.

When our correspondent visited the family house of the slain lecturer, Samaila Alhaji Musa, his aged father, Musa was seen visibly distraught.

The family of the slain lecturer was grieving in joy as his wife gave birth to a baby boy two days after he was murdered.

If there is any other word more than grieving, it could have described better the situation in Yobe after the attack on the collage.

News of the attack began like rumours as it appeared scanty in the early hours of Sunday. Authorities were not quick to confirm the report of the attack neither was the exact figure of the casualties handy.

At about 10am, the effect of the attack was full blown as 26 corpses of innocent students were brought to the General Sani Abacha Specialist Hospital in Damaturu where they were off-loaded and piled into the mortuary.

The hospital immediately became a Mecca of sort as parents, relatives, loved ones, security agents, newsmen and bystanders besieged the hospital premises. Sights of wailing, anguish, frustration, emotions of shock, pity and grief all characterised the sea of crowd that thronged the hospital.

While many struggled to identify their children or loved ones from the dead bodies, the sound of sirens rented the air signalling the arrival of another set of 14 dead bodies conveyed in two ambulances by combined men of the Road Safety, Red Cross, the police and officials of the hospital management Board.

The mode of the attack according to eyewitness was horrifying and most dastardly as students were executed at close range with guns.

It was observed that most of the dead bodies were either shot on the head or on the necks. Some were shot below their jaws while others had their skulls completely severed from their bodies by gunshots. Some students were killed in their hostels, others in the classrooms while others were shot while fleeing from the attackers.

Adamu, one of Samaila’s brother said that his brother was writing a book before he was killed.

“He was working on a book before his death. Samaila was one of the most brilliant in our family. He told me he had to sleep over at the collage that fateful day because of the workload he had on his job and the book he was writing.

“We will miss him so much especially his humour and the way he tried to make everyone in the family happy,”Adamu said.

The Provost of the collage Molima Mata also described Samaila as a very brilliant person and a dedicated and hardworking member of staff.

Mato informed that Samaila was the coordinator of the Student Industrial Work Experience Scheme( SWES) of the collage.