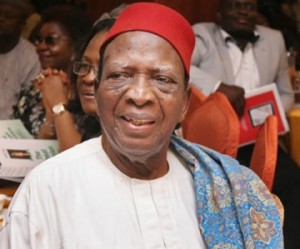 Professor Ben Nwabueze, SAN, has written President Goodluck Jonathan, asking to be excused from the 13-man Presidential Advisory Committee on National Dialogue, which will be inaugurated today.

The National Chairman of The Patriots wrote from his hospital bed in London, saying he would be away for sometime and hence might not be available for the one-month exercise that Senator Femi Okurounmu will lead. He consequently nominated legal icon, Chief Solomon Asemota, SAN, to replace him in the committee.

Nwabueze, in a two-paragraph letter to President Jonathan dated October 2, wrote: “I am presently in London for medicals and may be away from Nigeria for some time.

“I will be glad if I could be replaced in the Presidential Advisory Committee on national dialogue/conference by Mr. Solomon Asemota, SAN who is a member of The Patriots.”

In a congratulatory letter signed by Nwabueze, The Patriots said: “We write to congratulate Your Excellency for the indisputable bold step you have taken towards ensuring that a National Conference is convoked before 2015.

“The Patriots regard this development as epochal and reaffirms the support which we conveyed to you on the occasion of our visit on August 29. It is our fervent hope that nothing would be allowed to stand in the way during the preparation for and execution of the National Conference that would finally bring every Nigerian into the mainstream of governance.”