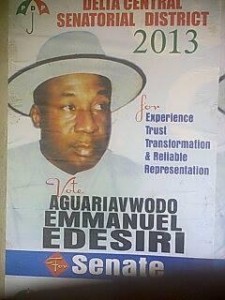 The News Agency of Nigeria (NAN) reports that PDP won in all the eight local government areas in the senatorial district.

The INEC official described the conduct of the by-election as free and transparent and urged all the political parties that took part in the exercise to accept the result in good faith.

He commended the political parties and their agents for the peaceful conduct of the election.

NAN reports that voting started late in many of the voting centres, following the late arrival of electoral and voting materials at the polling units and the voting period was extended for hours as a result.

Earlier, the Resident Electoral Commissioner in Delta, Gesila Khan, had described the election as peaceful in spite of some initial challenges.

She said, “Normally, voting ought to have started at 12.30 p.m., but because of the initial hiccups, it was not so. However, it ended peacefully at the end of the day.’’

The resident electoral commissioner said the initial challenges encountered were a normal occurrence.

“There can never be 100 per cent perfection in any election conduct anywhere in the world,’’ she added.

The bye-election followed the death of Sen. Pius Eweridoh of DPP on June 30, 2013.