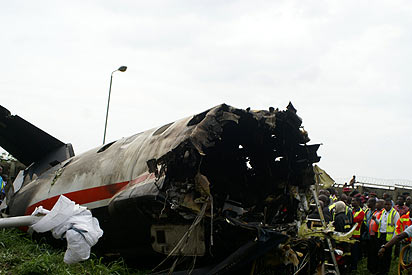 In a statement yesterday by his special adviser on media and publicity, Dr. Reuben Abati, the president offered his condolences to all families who lost members in the plane crash, and the government and people of Ondo State, who have been plunged into sorrow yet again while preparing to lay their former governor to rest.

“President feels and shares the grief and pain of the Agagu family as they grapple with the further loss of beloved relatives and associates so soon after losing their husband, father and mentor.

“He prays that God Almighty will comfort the Agagu family, as well as their relatives and friends, and grant them the divine grace they will undoubtedly require to overcome the trauma of this most trying time.

“President Jonathan views the plane crash as most unfortunate and regrettable, given the concerted efforts of the Federal Government to enhance aviation safety in the country.”

The statement said President Jonathan had ordered a thorough investigation of the crash by all relevant agencies with a view to determining the cause and taking further actions, as may become necessary.