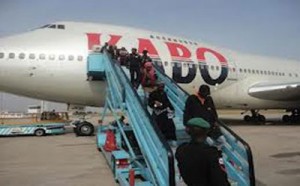 The management of Kabo Airline has denied reports that their Saudi Arabia bound aircraft Boeing 747 was involved in landing mishap at Sir Abubakar III Airport in Sokoto on the early hours of Saturday.

“No one was hurt, we were not involved in air mishap and it was just a speculation aimed to tarnish our image and God willing they will not succeed at all”, according to the management.

Spokesman of the Airline, Malam Aminu Hamza said “Our aircraft did not have any air mishap but what actually happened was that it had a rear tyre problem at a point of landing at Sokoto where it intend to pick passengers bound to Jeddah, Saudi Arabia”.

Reporters at its corporate office in Kano on Saturday quoted Hamza as saying, “all our aircraft are in serviceable condition”.