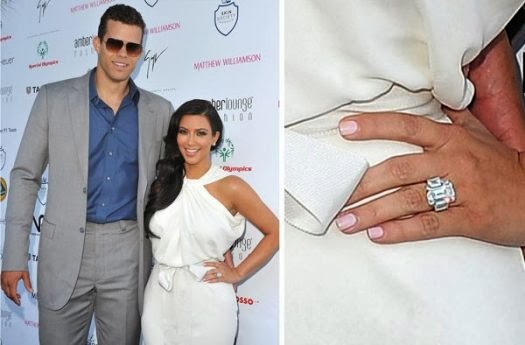 After all the ups and downs, Kim K and ex-hubby, Kris Humphries, finalize their divorce a couple of months ago.

The engagement ring Kris gave to Kim was sold at an auction for $620, 000.
The ring was weirdly acquired by Kim herself and sold yesterday October 15th at a Christie’s auction in NYC,

This is how Us Weekly reports it: –

The unknown buyer bought the Lorraine Schwartz creation, which features a 16.21-carat center diamond and two 1.8-carat side diamonds for a total of $749,000, which is plus tax.

The amount is a significant drop from the ring’s initial reported worth of $2 million.

“Kim has been waiting for the day he would auction it. Everyone always asked what Kim did with the ring – she silently gave it back over a year ago! And Kris waited until the divorce was final to sell it.” a source told Us Weekly

“The ring is definitely not worth $2 million, not even half of that,” sniffs the source. Indeed, Kardashian, not Humphries, initially paid for the ring herself.