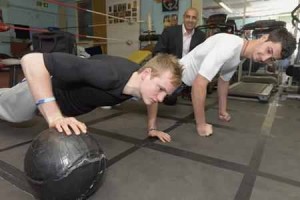 Are you one of those guys who like being lazy, sitting on the couch all day and stuffing your mouth with junk food but dream of impressing girls with their toned physique? It sounds like an unreal fantasy but thanks to the ingenious undershirt designed by an amateur boxing coach and his accountant friend, it is very much possible.

Created by Ash Bhunnoo and Ricky Robinson, the “Funkybod Muscle Top” is a padded shirt meant to cover your flabbiness with pads which not only look like toned muscles but actually feel real thanks to a foamy material which stretches to accommodate the weak, saggy flesh underneath. It took a while before they finally found a material that worked as they had envisioned, but they finally got the effect they were looking for. So rejoice fellow couch potatoes,  broad shoulders, a flat six-pack and firm, well-defined pecs and triceps don’t require a single visit to the gym thanks to this revolutionary invention.

The idea occurred to the two Brits one day at the gym when they noticed that more and more healthy people were coming in seeking only to change their physical appearance. “There are skinny guys who are perfectly healthy but when they go out on a Friday night they want to look a bit more buff,” Ash says. “Women have always been into padded bras and that kind of thing and guys now want a bit of the action too. Men can be as vain as women so we’re just selling them some confidence.”

So far, boxing coach Ash and his accountant friend, Ricky, have sold 1,000 Funkybod shirts from their website which they manage from their home as a side-job. The padded undershirts come in black and white and in four different sizes depending on how buff you want to look. Apparently they’ve been especially popular with Californians. “I don’t know what it is about Americans and vanity but they just love it,” Ash said. Despite being the inventor of the Funkybod, Ash is nostalgic of a simpler time in his young adulthood when looks weren’t  everything. “Back when I was younger we were never like that,” he says. “We would go out to the pub, have a drink and you might get a belly but it was alright.” Now they’ve had to adapt to modern standards, and the two inventors admit to wearing Funkybod t-shirts themselves, from time to time.