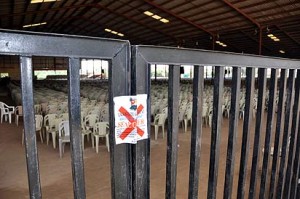 Lord’s Chosen Charismatic Revival Ministries has denied stories that the Lagos State Government had closed the church headquarters located in the Amuwo Odofin Industrial Estate, for violating environmental laws of the state, saying the church has not been closed by any government.

In a statement, yesterday, by the church’s Director of Public Relations/Press, Pastor Louis Chidi, he stated that the church and all her activities were running as usual, confirming, however, that officials of the Office of Drainage Services in the Lagos State Ministry of Environment actually gave notice about a particular facility that did not observe a certain requirement on the canal.

“Our attention has been drawn to the news being circulated that our church has been closed by the Lagos State Ministry of Environment. We wish to state the fact for the interest of our members and general public.

“First the church has not been closed by any government. The church and all her activities are running as usual.

“The fact is that officials of Lagos State Government from the Office of Drainage Services in the Ministry of Environment gave notice about a particular facility that did not observe the required set back from the canal.

“They therefore asked that the facility should not be used until necessary amendment is made. We have since complied and the facility reverted to the former status. Please take note that the church did not stop functioning because of this as there are many other facilities within the church premises.

“The second observation raised was the issue of street market that sprang up at the bus stop. We also want to state that the church never encouraged street trading within the estate or along its road because on many occasions it has caused traffic obstruction to those coming into the church premises.

“The church authority has also repeatedly warned those traders to stop desecrating the holy ground and several other efforts made to stop the illegal market were to no avail as most of them claimed to be paying rent and taxes to the ‘authority.’

“Meanwhile, officials of the task force section of the ministry have already dispersed the street traders.

“We wish to state emphatically that The Lord’s Chosen Church is a law-abiding ministry and will remain so in all her activities by the grace of God. The church was never closed, and above all, the cordial relationship existing between the state government and the church remains intact.

“We will continue to support and pray for the government of the state, her citizens and indeed the entire country,” he stated.

Spokesman for the Lagos State Ministry of Environment, Mr. Fola Adeyemi, however stated, yesterday, that the state government’s closure of the church will continue until its authorities fully comply with the environmental breaches.

Officials of the Ministry of the Environment had shut the headquarters of the Lord’s Chosen and Charismatic Revival Church, Ijesha, Oshodi-Apapa Expressway, Lagos, in the morning of on October 6, 2013, and prevented worshippers from having their Sunday service usually attended by thousands of faithful.