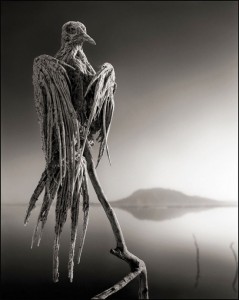 When photographer Nick Brandt first visited Lake Natron, in Northern Tanzania, he was shocked by the macabre animal statues he saw aligned across its shoreline. He later found out something even more shocking – those were real animals calcified by the lake’s alkaline water.

Natron, which gives the lake its name, is a naturally occurring compound found in volcanic ash. It’s the same mineral the Egyptians used to preserve their mummies. The lake’s alkalinity is similar to that of ammonia, with a pH between 9 and 10.5, and the temperature of the water can reach 60 °C. No animal can withstand this caustic environment and venturing into the acidic environment is usually fatal. As soon as birds and bats plunge into the waters of lake Natron, the minerals start turning their flesh into stone and preserving them exactly as they were in their final moments.

Flamingos sometime use the predator-free salt islands that sometimes form on the lake for nesting, but it’s a risky gamble, as the photos below clearly show. Only invertebrates, a few algae invertebrates and some fish that live near the edges of the lake can survive this environment.

“The notion of portraits of dead animals in the place where they once lived is what also drew me to photographing the creatures in the Calcified series,” Brandt explains. “I unexpectedly found the creatures – all manner of birds and bats – washed up along the shoreline of Lake Natron in Northern Tanzania. No-one knows for certain exactly how they die, but it appears that the extreme reflective nature of the lake’s surface confuses them, and like birds crashing into plate glass windows, they crash into the lake.

The water has an extremely high soda and salt content, so high that it would strip the ink off my Kodak film boxes within a few seconds. The soda and salt causes the creatures to calcify, perfectly preserved, as they dry. I took these creatures as I found them on the shoreline, and then placed them in ‘living’ positions, bringing them back to ‘life’, as it were. Reanimated, alive again in death.”

The amazing photos of Lake Natron’s calcified animals, as well as other photographs taken in Eastern Africa are included in Nick Brandt’s latest book, Across the Ravaged Land.

The animals are all arranged in poses by the photographer, for a more dramatic effect.