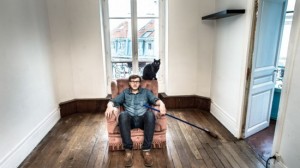 When the economy is in the toilet and employment rates are going down, some patriots concerned about their country’s welfare adopt various strategies to tackle the undesirable situation. One French documentary-maker named Benjamin Carle is currently staging a nine-month “economic patriotism” experiment by eating only French food and using French-made products exclusively.

Carle says he was inspired to start his experiment after seeing France’s minister for industrial renewal, Arnaud Montebour, in a Breton shirt on the cover of Le Parisien magazine as a sign of supporting the French industry by purchasing items made in France. Although not particularly patriotic, the young documentary-maker agreed to participate in the “Monsieur Made-in-France” television program in an attempt to inspire others and together raise employment rates in their country.

As a journalist, he was intrigued but what seemed to be a great idea at first proved to be a hassle considering that most of his furniture and other household items such as the fridge, washing machine and furniture were all foreign and had to be discarded. He also had to give up some of his favorite clothes because they had been ordered from English or American websites. Moreover, he indulged in eating various kinds of exotic fruits and vegetables, regardless of the season, and enjoyed drinking his morning cup of coffee, pleasures he had to renounce for the whole nine months.

Even his favorite music, by artists like David Bowie, Radiohead and The Smiths was replaced with French hits, and instead of Hollywood blockbusters Benjamin began watching French movies.  After eliminating all things not French, his small but expensive Parisian apartment contained only a chair, a table and Loon the cat, thankfully born in France but named after The Who’s British drummer Keith Moon “the Loon”.

It’s been five months since Carle started his experiment and so far everything he owns, uses and eats is French with the exception of his computer and cell phone which he still needs to communicate with his friends and co-workers. As the last two months of his inspiring journey are approaching he plans to force himself to live without these two items as well. Benjamin Carle’s lifestyle has changed dramatically since the beginning of Made in France.

He’s now aware that some products travel thousands of kilometers before ending up in his shopping cart and that consumers buy food without even considering the season. Accustomed to an Anglo-American culture embraced by millions of other people, he used to watch foreign movies, listen to foreign songs and ride his foreign bike to and from the places he needed to be. Now he’s travelling by train using the services of the Paris Metro which he’s not very fond of. But he’s also rediscovered the rich French culture that he had forgotten. He now finds pleasure in watching French films and although he misses his tea drinking habits, he’s happy to be a part of what he hopes will become a movement that will ultimately help the French industries and in consequence, the French people.