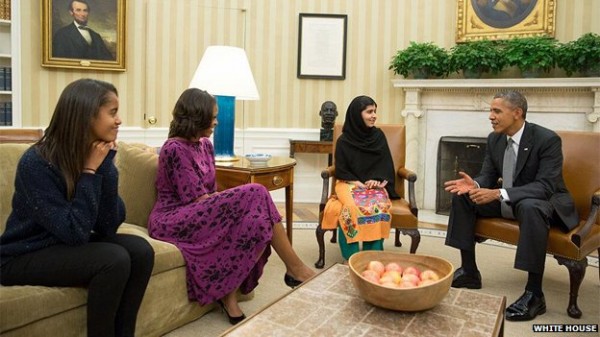 US President Barack Obama has met with 16-year-old Malala Yousafzai, an advocate for girls’ education and the target of a Taliban assassination attempt who was nominated for the Nobel Peace Prize.

Obama met with Malala on Friday, the same day the Nobel Peace Prize was awarded to the Organisation for the Prohibition of Chemical Weapons. The Pakistani teen had been considered a front-runner for the prize and was in Washington to speak at two events.

The teen said in a statement after the meeting that she was honoured to meet with the president, who is a Nobel Peace Prize recipient.

“I thanked President Obama for the United States’ work in supporting education in Pakistan and Afghanistan and for Syrian refugees. I also expressed my concerns that drone attacks are fueling terrorism. Innocent victims are killed in these acts, and they lead to resentment among the Pakistani people. If we refocus efforts on education it will make a big impact,” she said.

She called for greater cooperation between the governments of the United States and Pakistan.

The White House said in a statement that Malala met with the president and first lady in the Oval Office where the president signed a proclamation to mark Friday as the International Day of the Girl.

The proclamation says in part that “on every continent, there are girls who will go on to change the world in ways we can only imagine, if only we allow them the freedom to dream.”

Malala was shot in the head in October 2012 while she was going home from school. She was flown to a hospital in Britain, where she now lives. Her memoir “I am Malala” was published on Tuesday.

On Friday she spoke at a World Bank event and was scheduled to speak at a book event at the Sidwell Friends School, which Obama’s daughters attend.