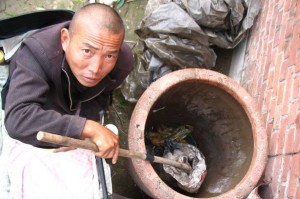 A man has sawn off his own leg to save his life because his family could not afford for him to have an operation.

Zheng Yanliang used a metal saw and a knife to perform the operation while biting down on a piece of wood.

The farmer took the drastic action after suffering with intense pain from an arterial embolism in his leg.

Zheng from Boading in Hefei Province first began to experience pain in his leg in January 2012.

But after a number of hospital visits his family could not afford to pay for an operation to have the leg amputated, Sky News reports.

The 47-year-old was sent home in agony – and reportedly given just three months to live.

He decided to amputate his own leg in April last year – biting down on a piece of wood wrapped in cloth.

He bit down with such force due tot he pain that he lost three teeth, according to reports.

Zheng’s wound has healed, but he now has an embolism in his other leg.

Following media coverage of his plight, a doctor in Shanghai has offered to amputate his remaining leg for free.