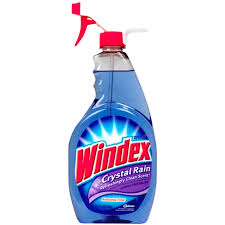 Windex is a glass and hard-surface cleaner manufactured since 1933. S. C. Johnson acquired Windex in 1993 and has been manufacturing it since.

Christopher Rounds was reportedly having anxiety attacks about caring for his 6-month-old daughter.

But now he’s really got something to worry about after authorities alleged that hesprayed Windex in the child’s face., station WTSP reported.

Police in Sarasota, Fla., were called to a local hospital Sunday morning after the infant was brought in with facial and head trauma.

The baby’s mother and a witness said that the little girl had been sleeping in her crib when they went to bed Saturday night, but they woke up Sunday morning to the sound of her crying harder than normal.

The mother then discovered the cuts and noticed the crib had moved into the living room, WTSP-TV reported.

Rounds, 26, was the only person awake with the baby when it was crying, according to the mother.

She told deputies that the suspect had smoked synthetic marijuana earlier in the day, and consumed alcohol, the Bradenton Herald reported.

Rounds had also discussed feeling anxiety over the prospect of caring for a young child, the newspaper reported.

Rounds told police that the baby’s mother went to bed at around 1 a.m. Sunday. He then spent about an hour trying to calm the baby and make her stop crying.

At around 5:30 a.m. he brought the baby to her mother, drenched in Windex and crying, according to News-Press.com.

Rounds denied hurting the infant, but offered no explanation for the child’s injuries or how she got covered in Windex, MySuncoast.com reported.