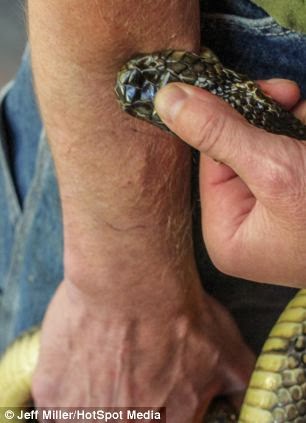 An unemployed factory worker has proved his immunity to snake venom by letting a deadly mamba bite his bare arm. Tim Friede says he has built up immunity and claims he has now endured bites from 100 poisonous snakes.

The 45-year-old from Milwaukee is now able to survive a snake bite from a black mamba, which normally kills anyone bitten within just 20 minutes. Mr Friede can also survive bite from cobras and other deadly serpents.

He hopes that by building up human immunity to snake poison he can contribute to the development of a new anti-venom. Pictures of the process show the mamba locking its jaws around his arm and leaving a bloody wound.
He said: ‘When people see what I do they usually swear or ask me if I’m going to die.
‘The pictures are a display of my immunity, to prove it works.
‘That’s the only way people will believe it, and the true test if self-immunization works.
‘Letting yourself get bitten requires a very high level of mental pressure, albeit a necessary one to beat snakebite.
‘Doing a pure venom injection is one thing, but a bite is a whole new level – and a necessary one.’

By proving his own immunity he hopes his work will lead to more efficient and affordable than the type produced from horses that is currently available.

‘What I do is called venom immunotherapy,’ Mr Friede said.
‘I take diluted injections of venom protein over time to build up my immune system.
‘What that does is build up good antibodies through time that bind to the venom and neutralize it so I don’t die.
‘This is the same way they make anti-venom in horses, I just cut the horse out of the picture. I’ve become the horse.’

However, he does suffer side-effects- Pictures show Mr Friede’s swollen hand, which is caused by his own anti-bodies attacking his body.
He has regular kidney and liver tests to check his dangerous work is not causing damage to his organs.

Mr Friede keeps dozens of poisonous snakes in the basement of his house and is working hard to contribute to a vaccine he hopes will make a difference to snakebite victims worldwide.

‘I hope through developing my own resistance to poison some solid groundwork can be laid to build a vaccine for the 125,000 people that die from snakebite every year.
‘At present the poor of Asia and Africa are the majority of the victims.’ 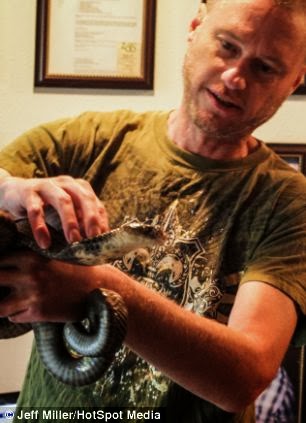