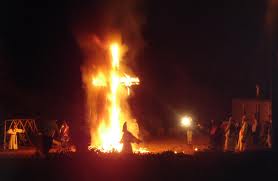 This was one cross he couldn’t bear.

Florida man, Ron Nielson, 50, was hospitalized on Tuesday after accidentally setting himself on fire when he set a cross ablaze as part of a Halloween display, WESH reported.

Nielson set up a cross surrounded by a circle of candles in the yard of his Palm Bay home at about 8 p.m.. He poured gasoline over the cross and candles, and then when he lit one of the candles the whole thing went up in flames — along with Nielson.

His wife was able to extinguish the blaze with a hose, but Nielson suffered second-degree burns over about half of his body, a Palm Bay Police spokeswoman told Floriday Today. He was airlifted to an Orlando burn unit.

Fire department officials said Nielson did not pour gasoline on himself, but caught on fire after vapors coming off the gasoline-soaked display ignited, according to NBC News.