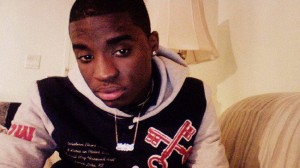 A young black man is suing the store Barneys and the NYPD after he was arrested following the purchase of a pricey belt.

Trayon Christian, 19, told the New York Post he saved money from a part-time job to buy a $350 belt by Italian designer Salvatore Ferragamo. But after he paid for the belt and left the store, he was arrested.

Christian alleges the clerk called police saying he had fraudulently purchased the belt.

Christian’s lawyer, Michael Palillo, told the newspaper even after Christian gave police his identification and proof he used his own money to purchase the belt, an officer said it wasn’t possible he could afford it.

“His only crime was being a young black man,” Palillo said.

Christian is suing the store and the police department for unspecified damages, the newspaper reported.

The lawsuit’s allegations haven’t been proven in court.