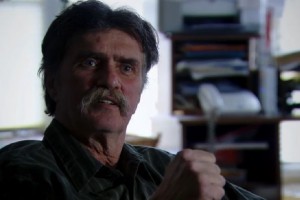 A war veteran has recalled the horrifying moment his body suddenly burst into flames while he was sitting on the sofa.

Frank Baker, who served in the US Army in Vietnam, is the only known survivor of the unexplained phenomenon known as spontaneous human combustion.

The highly-decorated former soldier had been preparing to go on a fishing trip with his friend Pete Willey when fire suddenly engulfed his body.

The pair recalled the terrifying incident, which took place in June 1985, in a new episode of the Science Channel’s Unexplained Files.

The episode features a reconstruction of the event, which can be seen below.

“I had no idea what was taking place on my body — none,” Mr Baker said.

“We were getting ready for fishing and sitting on the couch.

“Pete was sitting next to me — we were having a helluva time.”

The pair leapt to their feet and were able to put out the flames.

There have been around 200 reported cases of spontaneous human combustion.

Boffins who studied the phenomenon in 1984 concluded most victims had been near fire sources when they burst into flames — and continued to burn because of flammable clothing and excess body fat.

However, Mr Baker, who lives in Vermont, US, does not believe this was the case for him.

“The doctor called (me), and said, ‘Frank, this burned from the inside out,'” he said.