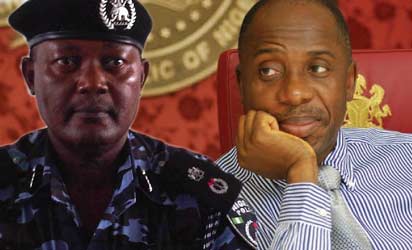 Confirming receipt of the petition dated October 1 at the weekend in Abuja, NHRC’s Director of Public Affairs and Communication, Muhammad Nasir Ladan said investigation into the allegations has commenced.

Gov. Amaechi had in his petition accused the state’s Commissioner of Police, Mr Joseph Mbu of exercising his duties without recourse to necessary constitutional and legal procedures.

Amaechi stated in the petition that, “Mr. Mbu’s mode of exercising his duties without recourse to necessary constitutional and legal standards is creating an environment rife with fear, distrust of security operatives and public institutions, strife, impunity, criminal behaviors and brigandage.”

He added that “Currently, the state commissioner of police barely acknowledges official communications from the governor, not to mention other principal agents of Rivers State. The avenues for giving him lawful directives in my constitutional role as the Chief Security Officer of the state have been unilaterally and unlawfully precluded by Mr. Mbu.”

The embattled governor therefore, urged the commission to “leverage its independence and capabilities to urgently investigate and ascertain if the current Rivers State commissioner is still fit and proper to superintend the police formation of a sensitive state in Nigeria with a complex human rights dynamics leading down to a general electioneering period.”