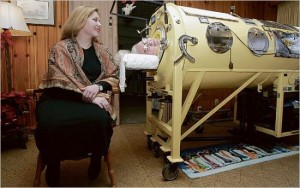 Martha Mason was an extraordinary human being who spent over 60 years of her life in immobilized in an Iron Lung after becoming paralyzed in her childhood years as a result of polio. Despite her seemingly desperate situation, Martha lived a fulfilling life, graduating from high-school and college with the highest honors, hosting many dinner parties and even writing a book called  “Breath: Life in the Rhythm of an Iron Lung”, in which she portrayed the challenges and joys of her life.

Martha was born on May 31, 1937, in Lattimore, a small town about 50 miles from Charlotte. Her story took a tragic urn when she was only 11 years old, after the death of her brother Gaston who had suffered from a terrible condition which left him paralyzed before eventually killing him. After his burial, young Martha realized she had also contracted the dangerous viral illness but kept it to herself as not to distress her parents even more. “I knew that I had polio. I didn’t want anyone else to know,” she wrote in her book. “The day before I had heard Mother talking to a friend about the iron lung Gaston had been in. . . . I knew I wouldn’t have that difficulty because I had excellent lungs.”

But soon she  too found herself  immobilized in the iron lung, dependent on it to do the breathing for her. “Iron lung” is only a colloquial term used to describe a pressure ventilator, a type of medical device which helps paralyzed people breathe by decreasing and increasing air pressure inside of a large iron tank. Ms. Mason has lived almost her entire life in such a tank with the pressure contracting and expanding her lungs when her weak muscles couldn’t. Doctors told Martha’s parents to take her home and make her happy for a year, as that was how long she had left to live. She outlived them both thanks to an avid curiosity and a desire to learn about the world.

But the iron lung didn’t stop Martha from enjoying life and learning as much as she could. With the help of her mother and her school colleagues she managed to finish high school top of her class. She then went on to graduate from two colleges – now universities, receiving an associate’s degree as well as a bachelor’s degree in English. She then return home to a job as a writer for the local newspaper which she managed to do by dictating the words to her mother. This went on until her mother became too busy for her helping her invalid father who had suffered from a heart attack. Years later, in 1977, he passed away. It was only decades later, in the mid 90s, that Ms. Mason was able to write again with the use of a voice-activated computer connected to the Internet. She soon began to work on her book, a memoir dedicated to her loving mother. Despite her mother’s descent into dementia and her abusive behavior towards her daughter, Ms. Mason took of her and hired helping aids which soon became her family.

Although obviously limited by her iron lung, Ms. Mason lived a fulfilling life among people who loved her. They held dinner parties and book club meetings at her house and made her a part of their graduations, weddings and trips around the world. In 2009 Ms. Mason passed away at 71, having spent 60 years with her cold life-companion, more than anyone else has ever lived in an iron lung. “I’m happy with who I am, where I am,” Ms. Mason told theCharlotte Observer, in 2003. “I wouldn’t have chosen this life, certainly. But given this life, I’ve probably had the best situation anyone could ask for.” Although other modern means of ventilation were presented to her over the years, she felt the iron lung gave her the most freedom.