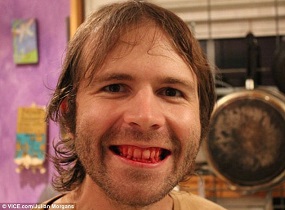 Derek Nance, from Lexington, Kentucky, U.S., has eaten only raw meat for the past five years, after a mystery illness caused him to develop an unusual appetite for bloody animal carcasses.

Derek says he even brushes his teeth with animal fat in a bid to feed his odd food addiction, and is training to become a butcher. He claims that he never gets sick of eating the same thing, and feels better than ever, adding, “The idea of cooked meat no longer appeals. It just tastes burned.”

He said that doctors thought he’d developed a food allergy when everything he ate started making him sick almost six years ago.

To combat his sudden weight loss, he scoured the internet to find treatment plans and diets. At first he cut out wheat and dairy but when that didn’t work he turned vegan, which also had no effect.

His fellow in misery recommended a carnivorous version of the Palaeolithic diet, popularly referred to as ‘the caveman diet.’

“I’d been sick for such a long time that I was willing to give anything a try. I had a couple of goats in my yard that I was using for milk, and you know, I was tired of milking them. So I slaughtered them. I ate both of those goats, all raw, and just switched over.”

At first, he said, there were certain problems with his stomach, as his body adapted to his new meat-loaded diet, but three weeks later he was hooked.

Mr Nance is keen to spread the word about eating raw meat. In a YouTube video, he demonstrates how to dissect a lamb’s carcass, which he’d left to ‘age’ in his fridge for a couple of weeks.

Adding a bizarre twist, Mr Nance’s girlfriend, Joanne, is vegetarian. However, she only recently decided to stick to greens and has tried her beau’s diet in the past.

She says she understands that he must restrict his diet for health reasons, and feels lucky that she can eat anything.

However, some people are less understanding about Mr Nance’s habits. The former electrician says that his family think he’s ‘lost it’ and at the ‘deep end of insane’. During family visits, his diet is not mentioned and they tend to avoid getting together around the dinner table.

Nothing goes to waste and he says organs and clotted blood are a good source of vitamin C.