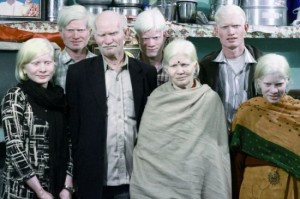 All eight members of the Pullan family from Delhi suffer from a rare genetic disorder called albinism which, as its name suggests, is characterized by the complete or partial absence of melanin pigment in the skin and hair. Because of this condition, Rosetauri Pullan, his wife Mani along with their three daughters Renu, Deepa and Pooja and three sons Shankar, Ramkishan and Vijay all have fair skin, white hair and light colored eyes despite being Indian.

Their ghostliness is not just an aesthetic problem. It actually comes with certain undesirable medical problems. Their pale white skin makes it impossible for them to stay in the sun for too long. The lack of pigment in their eyes have left them short-sighted and Shankar was even forced to attend a school for the blind. “All we know is that we can’t see properly, and we can’t sit under the sun for long, but we live the best we can,” the family explains. Unfortunately sunburns and short-sightedness are not their only concerns. There are only 17,000 people in the world who suffer from albinism and those who are unfortunate to live in less developed countries, like the Pullans, are harshly discriminated against

According to Mani, people have always treated them like outcasts because of their condition. Rosentauri says “People in Delhi are a little more open-minded, but many think we’re foreigners.” “I’ve heard people call us “angrez”, which means “English,” he explains. Jobs are especially hard to find because employers are very reluctant when they see the Pullans are different, and apart from Rosentauri, none of the other family members have jobs. But he is determined to take care of his loved ones as best he can. “It’s tough being an albino. I could never find a job, so I sell eggs, but that’s not enough to meet the needs of a large family,” he details.

Rosentaturi and Mani have been together since their arranged marriage in 1983. They now live with all of their children in a humble one-bedroom flat in Delhi. Despite the countless obstacles the Pullan family has had to deal with for their entire lives, Mani believes it has also brought them closer and now calls albinism a “gift from God.” So far, they have managed to live a happy and fulfilling life raising their children to the best of their abilities. All grown up now, their kids want to have families of their own. Renu, the eldest daughter, is already married to an albino man and has given birth to little Dharamraj, who also suffers from albinism. The oldest brother, Vijay, is also hopeful that one day he will marry an albino woman and start a family of his own.