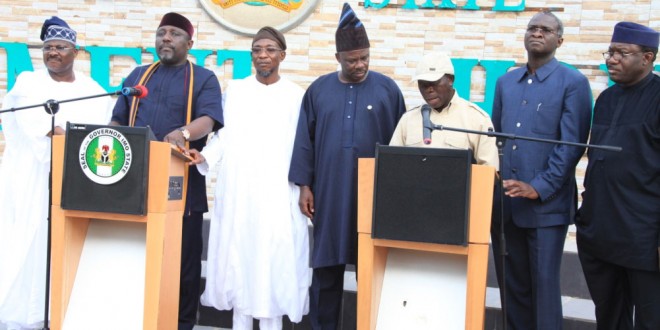 The Edo State Chapter of the Peoples’ Democratic Party, PDP, yesterday urged the chairman of the Independent National Electoral Commission, (INEC), Professor Attahiru Jega, to conduct fresh elections in about 11 states controlled by the All Progressives’ Congress, APC.

The PDP stated that due to the merger of opposition parties which gave birth to the APC, all the merged parties lost their identities, names and logos, hence the need to conduct another round of elections in states where APC governors hold sway. He cited the case of Edo where electorates voted for the defunct Action Congress of Nigeria, ACN, but have presently have an APC governor, therefore, “they lacked the moral justification to act as governors.”

Speaking in an interview with newsmen in Benin City, the Edo State capital while condemning the state government’s proposed move to sell Edo House in Lagos, the state chairman of the PDP, Dan Orbih, called on all APC governor, particularly Governor Adams Oshiomhole, to submit themselves to a fresh mandate having changed the party platforms on which they rode to power.

He stated, “I don’t know which government we have in Edo State because the people voted for the Action Congress of Nigeria (ACN), because as it is, I don’t know what they are claiming to be now.  If they now changed their name they don’t even have the moral rights to remain in office.

“What is on the record of INEC as at the time of the election that brought them into power is ACN, so they should resign and seek a fresh mandate and allow the people to decide who they want. Because I understand that the manifesto of APC is quite different from that of the ACN. You don’t shift the goal in the middle of a game, am taking this very seriously.

“Whether Edo people want to support APC with the change of name, so we need to look at the moral issue. Jega should conduct a fresh election because they have come with a new name, new manifesto, so they should seek fresh mandate of the people,” he stressed.