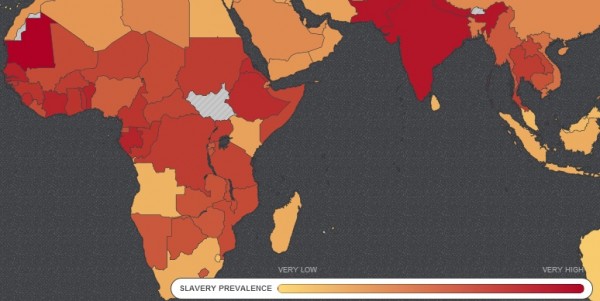 An anti-slavery campaign group says in a new report that Nigeria has the highest number of people living in what it describes as ‘modern slavery’ in Africa, while Mauritania has Africa’s – and the world’s – highest number of “slaves” in proportion to the total population. 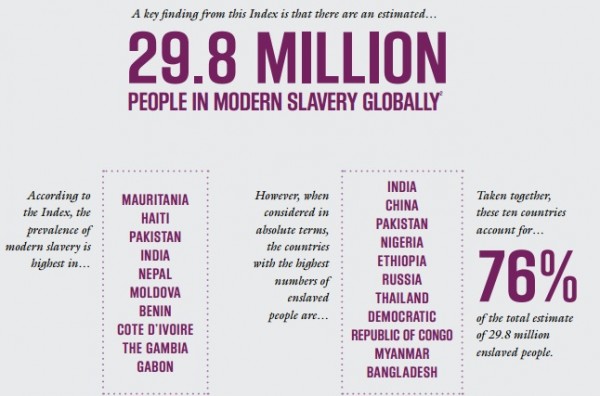 Nearly 30 million people around the world are living as slaves, according to a new index ranking 162 countries. The Global Slavery Index 2013 saysIndia has the highest number of people living in conditions of slavery at 14 million.

But Mauritania has the highest proportional figure with about 4% of its population enslaved. The report’s authors hope it will help governments tackle what they call a “hidden crime”.

“A lot of governments won’t like hearing what we have to say,” WFF chief executive Nick Grono told the French news agency Agence France-Presse. “Those governments that want to engage with us, we will be very open to engaging and looking at ways in which we can better measure the issue of modern slavery.”

The organisation’s estimate of 29.8 million slaves worldwide is higher than other attempts to quantify modern slavery. The International Labour Organisation estimates that almost 21 million people are victims of forced labour.

India, China, Pakistan and Nigeria have the highest numbers of people enslaved, the charity said. Together with five other countries, they account for three-quarters of the total estimated number of people in modern slavery worldwide.

The foundation defines modern slavery as including slavery as customarily understood, human trafficking, forced labour and ‘slavery-like practices’ such as debt bondage, forced marriages and sale or exploitation of children.

“Victims of modern slavery,” it says, “have their freedom denied, and are used and controlled and exploited by another person for profit, sex or the thrill of domination.”

Non-African nations in the worst 10 are, in order, Mauritania, Haiti, Pakistan, India, Nepal and Moldova.

The report says Mauritania experiences mostly “chattel slavery” meaning that “adults and children… are the full property of their masters who exercise total ownership over them and their descendants.” It also says there are high levels of child marriage in Mauritania.

While Cote d’Ivoire is cited as one of the nations “working hard” to address the problem, Mauritania is one of the countries in which the response is “token at best.”

“In Cote d’Ivoire,” the report says, “a unique system of protection has been formed, harnessing the market forces of cocoa purchasers as a mechanism to drive overall improvement in labour practices and move towards the eradication of worst forms of child labour and forced labour in cocoa production.” 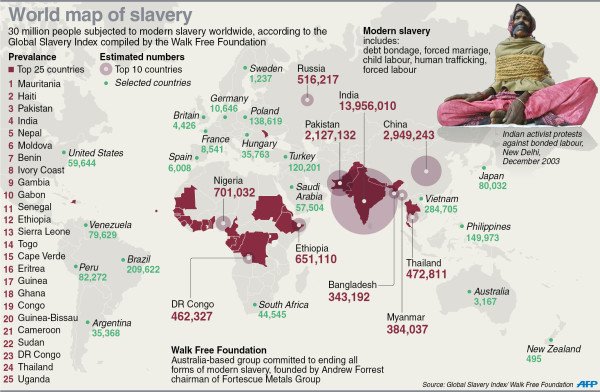