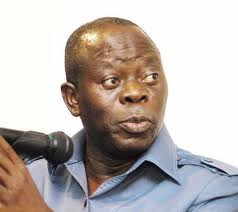 The inability of the Federal Government to pay the monthly allocation to other tiers of government in recent times has been described as a ‘financial crisis’ with grave security implications by the governor of Edo State, Comrade Adams Oshiomhole.

He also wondered why the Nigerian National Petroleum Corporation (NNPC) cannot remit over N2.3 trillion to the Federation account.

Speaking at a media chat on Thursday as part of activities to mark the country’s 53rd independence anniversary, the governor lamented that states were unable to pay salaries, pensioners, contractors as well as fulfill other obligations.

His words, “I don’t know if the Federal Government is broke, but I know there is serious crisis and it is unprecedented in the history of this country.

“For the first time since 1999, allocations can no longer come as at when due to states. I have been involved in trying to understand what the reasons are and I have not seen anything yet. Whether we use the word broke or you deny the word broke, the truth is that there is financial crisis in Nigeria which has very serious national security implications.

“Because when we can’t pay salaries, Federal Government can’t pay salaries as at when due, and you can’t pay your contractors and your contractors will begin to retrench their workers, that is recipe for national disaster. So I am hoping that NNPC should wake up and meet its obligation to the Federation Account, otherwise, the integrity of government is at stake. If I can’t keep my promise, Federal Government can’t keep its promise, all other governors can’t keep their promises, the Nigeria electorate will be so disillusioned and it will be a disaster. So I am hoping that NNPC recognizes that it cannot be business as usual and they have few cases to answer as far as I am concerned,” he said.

Gov. Oshiomhole recalled that two years ago, the problem was about the amount of money Nigeria was spending on subsidy as revealed by the various probes by the National Assembly and the Presidency “But just as we are dealing with that, now we begin to hear about the theft of our crude oil such that what is accruing to the federation account is not enough to meet budgetary provision.

“This year’s budget was based on 79 dollars per barrel that is about 2.4 – 2.5 million barrels per day. Now, contrary to all the forecast, nothing is getting better. And it is sad that we are not doing enough to change things for the better, the challenge of government in any part of the world is to deal with the issues. If the economy is not doing well, you do certain things differently and recover.”

He added, “It is no more matter for debate, we are ten months into the new year and oil has performed very well, at about 105 to 110 dollars per barrel throughout 2013, which means that if we have budgetary provision of 79 dollars, we ought to have a surplus of about 30 per cent, which should be in the crude oil account. But rather than having this surplus, we are witnessing a situation where federal allocations no longer come as at when due, states can’t pay salary.