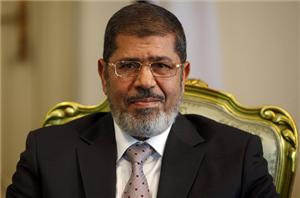 The trial of Egypt’s deposed President Mohamed Morsi and 14 others, on charges of inciting the murder of protesters will start on November 4, the official MENA news agency reported.

Morsi was alleged to have incited the killing of protesters outside his presidential palace in December 2012, almost six months before his overthrow in a military coup.

Lawyer Mostafa Atteyah said a meeting of Morsi’s defence team, planned later on Wednesday, was to decide on the course of action and name the head of the team. He said so far the legal team has not seen the case’s documents.

“This is like all the other cases. It is a fabricated one,” Atteyah said, adding that most cases against Brotherhood members are based on weak prosecution. He said Islamist scholar and former presidential candidate Salim al-Awa is expected to lead the defence team.

The case Morsi was charged in dates back to one of the deadliest bouts of violence outside the presidential palace on December 4, protesting a decree Morsi issued to protect his decisions from judicial oversight and a highly disputed draft constitution that was hurriedly adopted by the parliament.

The next day, Morsi’s supporters attacked protesters who had camped outside the palace, sparking street battles that left at least 10 dead and bring accusations that Morsi relied on organised mobs to suppress the sit-in.

Morsi’s Muslim Brotherhood, however, claimed that most of those killed were his supporters.

Leading Brotherhood members Essam el-Erian and Mohamed el-Beltagy will be tried alongside Morsi. Erian is currently in hiding.

The military has detained Morsi in a secret location since his overthrow on July 3. His supporters and opponents of military rule have demonstrated across the country since.

Hundreds of people have died in clashes with security forces and many Brotherhood figures have been arrested.