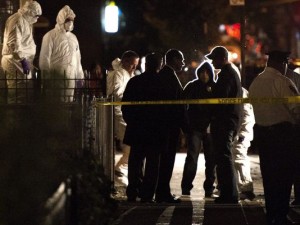 A woman and four young children have been stabbed to death in a Brooklyn, New York apartment.

The dead woman’s sister, who was in the apartment at the time of the massacre, survived unscathed and managed to call 911.

The New York Police Department (NYPD) said early on Sunday that officers who arrived on the scene found all five victims unconscious and unresponsive.

A 25-year-old male suspect, reported by the New York Post to be the older cousin of the child victims, was seen being led from the scene in Sunset Park.

Tragically, the children’s father, the New York Post says, came home from work too late to save his family.

He said two others were taken to Brooklyn hospitals, where they were both pronounced dead. The department initially said three people were taken to hospitals.

Long said the FDNY went to the house after reports of a stabbing. Police provided no further details and would not say if anyone was in custody.

The working-class neighbourhood is home to many Asian and Hispanic immigrants.