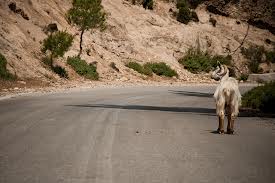 Animal control officers in Des Moines used a tranquilizer to capture a mysterious goat that had dived into traffic and was on the run for hours.

The Boer goat got a taste of freedom Wednesday morning as she evaded capture on the city’s south side. The brown and white animal with floppy ears ran into traffic and eventually went into a fenced car dealership.

The Des Moines Register reports officers chased the goat around the dealership before using a tranquilizer to stop her.

Officials say the goat appears to be healthy and uninjured. Authorities are now looking for her owner.

Last week, animal control workers in Des Moines took into custody a roughly 200-pound pot-bellied pig that had spent weeks on the loose in an east side neighborhood.