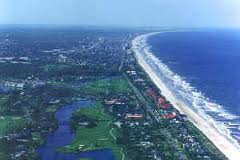 Volunteers patrolling a Florida beach last week stumbled upon a mysterious buried boat that may date to the early 1900s.

“I saw a part of the ribs of the boat sticking out of the sand,” Friedmann, who was combing a stretch of Ponte Vedra Beach at the time, told First Coast News.

Friedmann’s sharp eyes were doubtless aided by recent storms, which had shifted the sand around the ship and exposed parts of its timbers. In any case, word of the discovery eventually reached local archaeologist Chuck Meide, who set out with a team from St. Augustine’s Lighthouse Archaeological Maritime Program to investigate the boat’s newly exposed wooden ribs and keel, reports local station News4Jax.

“It’s always exciting for an archeologists to find a new shipwreck,” Meide told News4Jax. “We know the First Coast is littered with wrecks. We had visitors to St. Augustine in the 1780s who said you couldn’t walk 50 paces down the beach without running into the old wooden bones of a … wreck.”

Indeed, Florida is so known for its shipwrecks that the National Park Service made a map of some of the state’s most popular finds. Vital to the region’s development for centuries, Florida’s location amid maritime trade routes from multiple continents has made it a treasure trove for historians and adventure seekers.

Researchers hope that this recently uncovered ship’s construction methods will offer some clues as to where and when it came from, notes News4Jax. Meide has so far speculated that the boat may have been a shrimper from the early 20th century.

Local community website Ponte Vedra Now speculates that the wreck may be part of an oiler named the Fortuna II, which became stranded in the area back in 1938.

“There are probably about 450 shipwrecks off the Northeast Florida coast,” the website notes. “In fact, the sandbars offshore of the St. Augustine Fort are home to more shipwrecks from the 16th and 17th century than any place in America except the Florida Keys.”