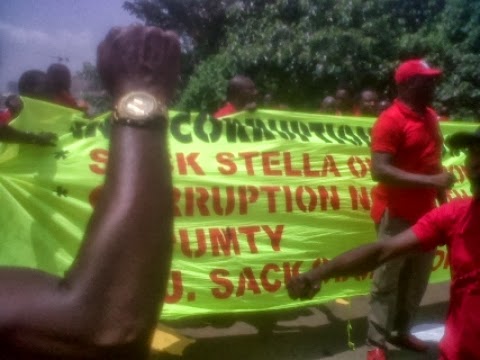 Former House of Representatives member, Otunba Dino Melaye was arrested this morning for leading a group of protesters demanding the resignation of the Minister of Aviation, Princess Stella Oduah.

The minister has being in the eye of the storm in recent days following news reports that she compelled a cash-strapped agency under her ministry to purchase two special purpose vehicles for her use at the cost of $1.6m (N255m).

Melaye, who organized the protest under the auspices of the Anti-Corruption Network (ACN), was picked up by a team of armed policemen led by an Assistant Commissioner of Police, ASP Sunday Odukoya.

The protest which commenced peacefully at about 11am in Abuja attracted men of the FCT Police Command when a group of knife-wielding protesters, purportedly hired by the embattled minister’s supporters, invaded the scene and attacked the former lawmaker’s group.

In the ensuing melee, Melaye, who is also the Executive Secretary of the ACN, was arrested for staging an “illegal protest” and whisked away in a white Hilux van with police registration number NPF 2128C.