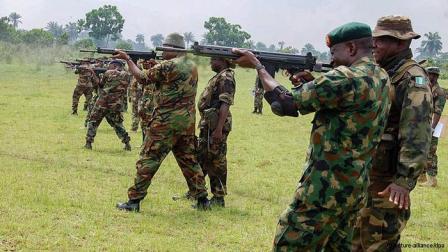 The Nigerian Army Depot, Zaria in Kaduna State has urged people of the state not to panic at the sight of massive troop movement, arms and sound of gunshots that would be noticed from today, just as residents of Tohu, Sakadadi and other neighbouring villages have been advised for their own safety, to stay away from its range shooting site in Zaria.

In a statement yesterday by the acting Public Relations Officer of the Depot, Major Joshua Adisa, the 70 regular recruits’ intake will commence their range classification shooting training at the Nigerian Army’s range off Zaria-Kano expressway.

Major Adisa said the training is expected to last for one week, starting from today, Tuesday to next week, October 22, 2013.

“The range classification will involve firing of live ammunition using small arms. We are therefore requesting the general public, especially those residents around the range area, not to panic on hearing small arms fire and movement of troops and military material during and after the exercise. All safety measures and precautions have been put in place to ensure a hitch-free military training exercise,” he said.