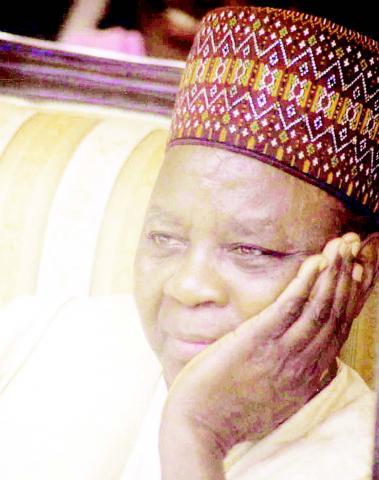 The Northern States Governors’ Forum on Wednesday described the death of Chief Solomon Lar, the first civilian governor of old Plateau, as a devastating loss to the citizens of the state and the country.

The Forum’s Chairman, Gov. Babangida Aliyu of Niger, said that with the death of Lar, “Nigeria has lost a patriot of uncommon courage’’.

The forum’s condolence is conveyed via a statement signed by Mr Danladi Ndayebo, spokesman to Aliyu.

The forum said that Lar played prominent roles in the country as a legal practitioner, member of the country’s first national legislature, state governor, the first national chairman of the PDP and an elder statesman.

It also described the deceased as a nationalist who lived a purposeful life, which was dedicated to the cause of national unity and the welfare of the citizenry.

It called on the Plateau Government to immortalise Lar so as to serve as an inspiration to the younger generation of Nigerians.

The forum prayed God to grant repose to the soul of the departed, while granting the PDP and Lar’s family the fortitude to bear the irreparable loss.

Also, former Vice-President Atiku Abubakar, in a statement issued by his spokesman, Malam Garba Shehu, described the death of Lar as “the loss of one of the country’s greatest statesmen.

“He was a leader Nigeria needed at each time of crisis,’’ he said, adding that his demise would be most felt at this time when there was growing disagreement among the country’s political elite.

“Chief Lar’s fight for the people of the Middle Belt (region) and Nigerians, in general, will be remembered by every worthy historian of this era,’’ he said.

Atiku prayed God to grant repose to the soul of the deceased, while granting his family, Plateau State and Nigerians, as a whole, the fortitude to bear the huge loss.

Besides, Alhaji Lai Mohammed, the interim National Publicity Secretary of All Progressives Congress (APC), noted that Lar died when the nation needed his wisdom and maturity most in efforts to address the crises facing the country.

In an interview with News Agency of Nigeria (NAN), Mohammed said that although Lar was aged, the nation would have enjoyed him more if he had lived longer.

Moreover, Rep. Andrew Uchendu (PDP-Rivers), who described the late politician as a great leader, said that Nigeria had, indeed, lost a great patriot.