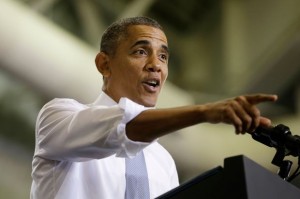 US President Barack Obama has blamed Republicans in the House of Representatives for a partial government shutdown, saying they are carrying out an “ideological crusade” against his healthcare law.

Speaking at the White House on Tuesday, the first day of the partial government shutdown of non-essential services, triggered by the failure of Congress to pass a budget law, Obama said Republicans, who have refused to pass the funding bill unless reforms are made to his landmark healthcare law, should not be able to hold the entire economy “hostage”.

He urged them to reopen the government quickly and allow furloughed federal employees to go back to work.

The government shut down because Congress did not pass a funding bill ahead of Monday’s midnight deadline for the end of the 2013 fiscal year.

The partial shutdown, the first such event in 17 years, meant that 800,000 “non-essential” workers were forced to remain home on Tuesday.

The Republican-controlled House has passed two spending bills in recent days, both of which have been rejected by the Democrat-led Senate. House Republicans asked for a conference on the budget with the Senate, but the upper house of Congress killed that proposal when it met on Tuesday morning.

Senate majority leader Harry Reid, a Democrat, said that he would not negotiate as long as the House linked the budget law to the healthcare law.

Tuesday’s Senate vote was the fourth time since this political battle began that the body had rejected a House Republican bill or proposal.