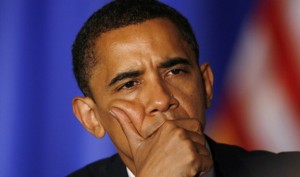 US President Barack Obama has scrapped plans to attend Asia-Pacific Economic Co-operation (APEC) summit as he seeks to break deadlock between Democrats and Republicans which led to the US government shutdown in Washington.

In a written statement on Thursday night, the White House said that Obama had scrapped travel to Bali and a subsequent trip to nearby Brunei for the East Asia Summit.

“Due to the government shut-down, President Obama’s travel to Indonesia and Brunei has been cancelled,” the statement read.

“The President made this decision based on the difficulty in moving forward with foreign travel in the face of a shutdown, and his determination to continue pressing his case that Republicans should immediately allow a vote to reopen the government.”

The White House said Obama had phoned Susilo Bambang Yudhoyono, president of Indonesia, on Thursday night to tell him he could not attend.

“He expressed his regret that the ongoing government shutdown in the United States will prevent him from attending the summit,” the statement read.

The White House said Obama reaffirmed the importance of the US-Indonesia partnership, and his personal affection for the people of Indonesia, where he spent several years as a student after his mother and step-father moved to the Asia-Pacific country.

The statement said that Secretary of State John Kerry would take Obama’s place in Bali.

Obama had planned to leave on Saturday for what had originally been a four-nation, week-long Asia trip.

He had cancelled visits to Malaysia and the Philippines earlier this week because of his budget struggle with Republicans in Congress.