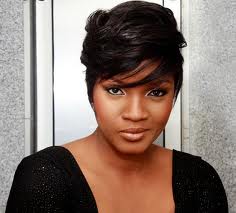 Nigerian actress, Omotola Jalade-Ekeinde, known by her fans as Omosexy, was named as one of Time Magazine’s 100 most influential people in the world this year. She recently visited BBC Africa studios in London, where she told Focus on Africa’s Komla Dumor about her career, how she balances her work and life. To spice it all, Omotola told the station that she pounds yam.

She is one of the biggest stars of the Nigeria’s film industry referred to as Nollywood, having appeared in more than 300 movies, as well as having her own reality TV show.

Omotola was recognised as an entrepreneur and one of the most widely known and award-winning actresses in Africa.