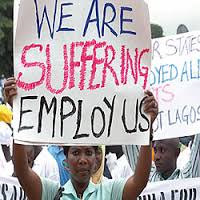 There is this long rant inside me about unemployment among Nigerian graduates, and today it has come out as it is better formed. Sometimes it is desirable for people to be free of fear of confrontation in order to invoke honest opinion. And that is what I am going to say here.

I have read many articles about Nigerian graduates and their plight in the labour market. The affirmative has it that Nigerian graduates’ inability to secure job is self inflicted. Although they are opposing views, the majority view is that they are many charlatans among the graduates. How correct are these assertions? The facts will speak for themselves.

This is a dyspeptic critique of the humanitarian movement at every level, and has won attention partly because of that view. In fact, this is another show orchestrated for us to justify the names that have been branded Nigerian graduates: unemployable

The truth is that Nigerian graduates are employable but they are unlucky to be in this part of the world. What we are facing now is hegemony, another form of denying people from economically disadvantaged home jobs and double standards. The employment opportunities are there but for selfish reasons, we have been denied these opportunities.

If you buy these lies that they are no jobs in Nigeria, you are either a sucker or getting paid to spread the unfounded talking points. Who are the ghost workers? Many previous efforts to bring blatant violators of the aforementioned crimes into compliance had failed. Is it not enough to agree with my point?

Another one that pains me is the issue of curriculum vitae (CV). It is now becoming like those days that our darling Super Eagle failed to fly. Blames were attributed to almost everybody and things including the white jersey. Some attributed blame to it saying that it is the hoodoo. Today blames are being attributed to the CVs some graduates present. What is in the CV? Is it not what one has upstairs that should grant him the job?

Enough of these blames. Years are elapsing while important problems remain unsolved. It is time to create jobs for graduates. We are not immune from such trouble that gripped Tunisia, Egypt and some other countries. The movement is not a decided fiasco in Nigeria. Revolution can take place anywhere.