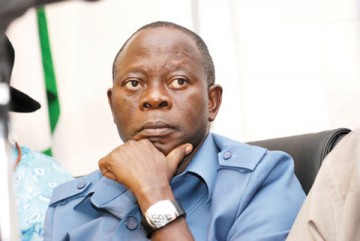 The Presidential Advisory Committee on National Dialogue on Monday condemned the disruption of its proceedings in Benin City by some persons while Governor Adam Oshiomhole was making his remarks.

A statement signed by the Chairman of the Committee, Sen. Femi Okurounmu, said the committee took exception to the “unruly conduct” of one of its members who joined the crowd in shouting down the governor.

It said that in spite of the unfortunate incident, the committee was “unequivocally committed to the principles of democratic discourse.

“We want to emphasise that the committee will listen to all shades of opinion in the areas of its mandate  and will not henceforth condone the kind  of unacceptable behaviour  we witnessed in Benin City today.

“The committee wishes to express its sincere appreciation to the Government and People of Edo State for providing support to the Committee in its assignment in the state”.

NAN reports that the remark by Oshiomhole that the conference was “waste of resources” did not go down well with some participants who shouted the down governor.

The committee’s sitting was temporarily halted as the Chairman sought to bring order to the proceeding while the governor left. (NAN)